Syndesmotic injuries or a high ankle sprain as they are commonly known are far less frequent than the commonly injured lateral ligaments in a normal ankle sprain. A high ankle sprain damages the ligament which holds the tibia and fibula together (the syndesmosis) which are very important in terms of stability during sporting performance in particular.

They are generally injured from a twisting or external rotation injury and often happen in conjunction with ankle fractures, deltoid ligament damage (ligament on the inside of the ankle) and or lateral ligament pathologies. Obviously the degree of damage can vary greatly and some people can bear weight but experience some pain over the ankle joint where the tibia and fibula meet. This means injuries can be missed as pain can become reduced but gross instability can then become a problem.

High ankle sprains tend to affect high level athletes in particular and for that reason it is important to treat them effectively. In acute injuries a positive clinical test can be easier to elicit however if the injury has happened previously and a patient presents with low grade pain and a feeling of instability the tests aren’t as reliable. An MRI scan is arranged for patients to determine the extent of any damage and to out rule osteochondral lesions (OCLs) and other ankle pathologies.

The surgery begins with an ankle scope removing any fibroarthrosis or scar tissue in the ankle. During the scope the surgeon can confirm syndesmotic injury and can proceed with the rest of the operation. Lateral ligaments and the peroneal tendon pathologies can also be treated during the same operation.

The surgeon makes a small incision on the outside of the patient’s leg where he will drill a small hole across both the fibula and tibia. This is done using x-ray guidance and allows for correct placement of the Arthrex knotless/knotted TightRope. The TightRope then provides fixation across the tibia and fibula acting as an artificial syndesmosis ligament ensuring a stable ankle mortise. The TightRope consists of a strong suture loop secured between two metallic buttons which can rest flush against the surface of both the tibia and the fibula.

The TightRope’s suture loop is strong enough to reliably hold the tibia and fibula together but also allows for a certain amount of movement necessary for a high level of sporting activity. Depending what other surgery the patient has undergone they can generally undergo normal weight bearing within 6 weeks and should return to sporting activities in 10-12 weeks. They should wear an airiest boot provided the day of the operation and will be monitored by Mr Kearns and arranged intervals. 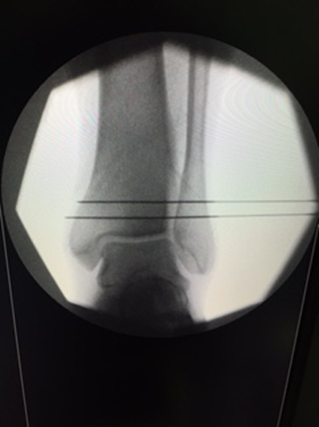